About me automatic widget

This is an automatic widget added on Third Bottom Widget box (Bottom Widget 3). To edit please go to Appearance > Widgets and choose 3rd widget from the top in area second called Bottom Widget 3. Title is also manageable from widgets as well. 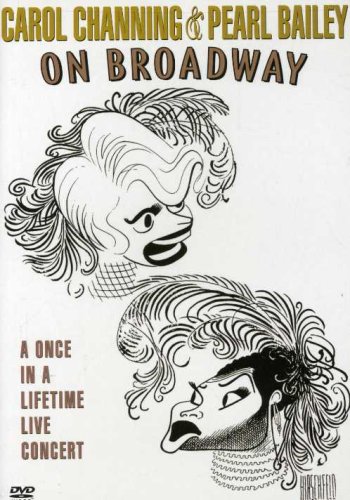 Through the continuing novelty of HDTV—and no thanks to the crappy HD DVR software on the Comcast box—I discovered a digital broadcast of something whose on-screen guide name was “Channing and Pearl Bailey”. Being the good little gay boy I have always been, I instantly made the connection: Channing was Carol Channing, she of Hello, Dolly! fame. My favorite musical, my favorite Dolly Levi. My favorite favorite favorite of all the Original Cast Recordings my own Auntie Mame owned. Others included Cabaret, Fiddler on the Roof, Mame, Camelot and Man of La Mancha.

So I hit the Record button on the remote to capture “Carol Channing and Pearl Bailey on Broadway”, something the info section of the guide told me was actually a special that aired on ABC-TV in 1969. Specifically in January of 1969. I was 4 then, and by then could already—at least phonetically—sing all three languages of Wilkommen! from Cabaret and could mimic Dolly Levi’s Yonkahz aaaccent with a preciseness that seems to come naturally to our people. I would stand on tip-toes at my Aunt’s console stereo, fingers gripping the edge as I peeked over to watch the vinyl disc spin, watch the needle arm sway and rise and fall with the warps on the record, watch the lint accumulate on the soft triangular brush on the tip of the needle arm (which trailed the needle itself—bad design!).

When I watched the show, there were moments when I got the chills—not because of the astoundingly resilient performance of Bailey or the electrifying antics of Carol Channing, but because the melody lines filling the room had filled my heart—and, dare I say, filled my soul—so early on.

Very possibly this is where I learned that music isn’t a thing to enjoy so much as an integral, organic part of Being. It picks up where ordinary words fail and certain note intervals are spaces through which the Face of Eternity may be seen.

It was interesting, also, from an historical and even short-throw anthropological (hi, Ted!) sense: the outfits the audience wore. The hairstyles. What could be gotten away with on television in 1969. What can no longer be gotten away with in 2006! That Carol Channing was only 48 years old and Pearl Bailey only 51. That they were 48 and 51 and could dance and sing and glide and glissando so gracefully and forcefully and without a net. The genius of Broadway of that era.

But mainly, the magic was all in them singing popular showtunes of the time; the show finished off with both in red sequined gowns, both as their own respective Dolly’s.

Nothing props up the notion of a continuous-me throughout my own history than the music that I’ve known and felt as long as I’ve known or felt just about anything.

This site uses Akismet to reduce spam. Learn how your comment data is processed.